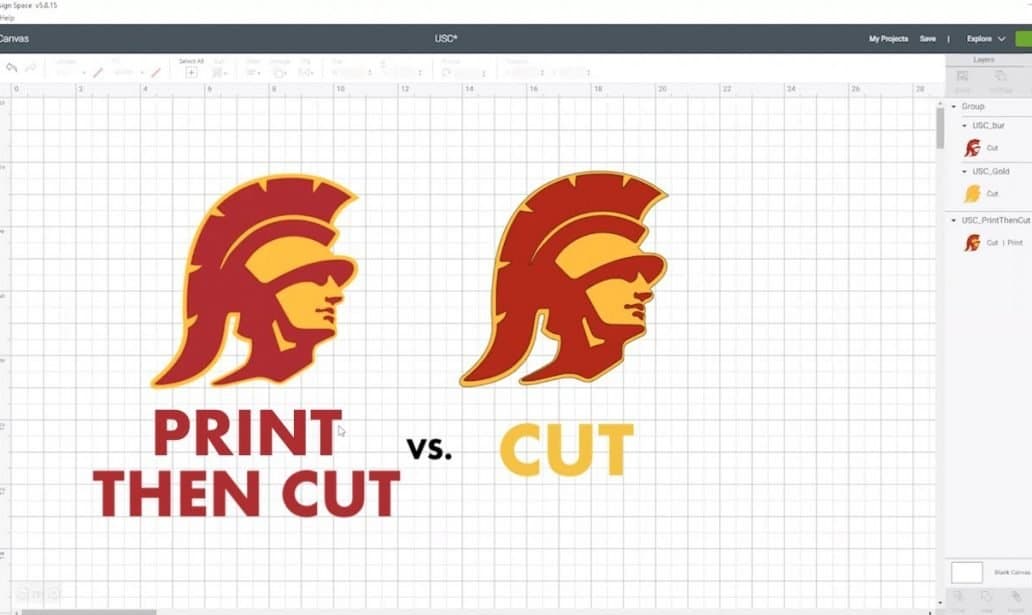 Cricut Design space allows you to save your images and projects as a cutting project/image or as a Print the Cut project/image. This tutorial will help you to understand the difference between the two and help you determine which is right for your needs.

When the Cricut first came out, it was marketed as an electronic die cutting machine. It was primarily marketed to paper crafters for scrapbooking and card making. Until the invention of the die cutting machine, crafters had to either hand cut their embellishments, or purchase pre-cut embellishments and stickers. I personally I spent a lot of money on sticker letters to use on my scrapbooking layouts and cards. It was always frustrating when I was in the middle of a project and just needed one more sticker letter. I would needed to run to the store to purchase a whole alphabet sticker set because I needed one more “a” for my project.

When the Cricut came along it was a game changer. It allowed us to cut our own letters and embellishments, add adhesive to the back of them, and place them on our projects. For me personally, this meant no more need for sticker letters since I could cut letters out of any color of cardstock that I owned.

Cut images and projects allow you to create embellishments with more depth because of the layering process. Each color in the image is cut on a different layer. Then you stack those layers together to create the finished image. Since you could cut each colored layer with a different material this allowed you to create a wider variety of embellishments.

For example, here is a card I made where the turtle is cut from several different colors. Each color is it’s own layer. I cut two layers from cardstock. I cut the green shell layer from a thin film that has a shimmer and pattern in it.

You also can also more easily create cut images and project in larger sizes since the Cricut has a large mat that is 12″ by 24″. There are even tricks you can do to cut projects larger than this, which I show you HERE.

Print then Cut images and projects

A Print then Cut image/project is one where the image will be printed from your home printer, then that printed sheet will be placed on the Cricut cutting mat and loaded into the machine, and the machine will cut out the image for you. I like to compare this to a traditional sticker. The image is a flat, one layered image that you can lift off and place in one piece. This is a great option for an image that has a lot of colors or shading to the coloring, since that would be difficult to layer.

The image on the right is a puzzle created with the Print then Cut feature. The photograph was from a family vacation we took, and I used my Cricut to cut it into the puzzle shapes. If you want to see the tutorial specifically on that project you can click HERE.

Side by Side Comparison

Sometimes looking at things side by side is the best way to see the differences. I created a video that shows the exact same image created two ways . . . once as a Print then Cut project and a second time as a Cut image. For both of them I used cardstock so it would be an equal comparison. I did the Print then Cut image on white cardstock. I cut the Cut image from two colors of cardstock.

Choosing Print then Cut or Cut

Now that you know the difference between a Print then Cut image/project and a Cut image/project how do you choose which one is right for YOUR project? For me, I have to think about several questions before I can answer that.

If you have any additional questions about the difference between a Print then Cut project and a Cut project, please comment below. I will then add the answers to those questions to this post to make it and even better resource for others.

DESIGNED AND DEVELOPED BY MOSCH MEDIA